Make It Soon (O my Lord)

Victory Is The Only Song I Know

Often When The World Crowds

Battle Hymn (There's a sound on the wind)

Fighter was recorded in California and featured mostly new compositions by Graham, however Make it Soon first appeared on Paid on the Nail and Reluctant Disciple includes a segment of I'd Like to be a Martyr from Bright Side Up.

God Put a Fighter in Me was also recorded by UK pop singer Cliff Richard. British Female CCM artist Sheila Walsh who recorded many of Graham's songs in the 1980's also recorded the title track and named her autobiography after the song.

Fighter was released on Dovetail in 1978, and re-released by Kingsway in 1983. 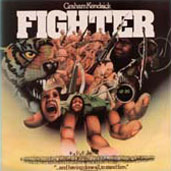