Breaking Of The Dawn


Teach Me To Love


John Smith (Quite early on in your life)


Being Myself In Jesus

There is a kind of dawn breaking in millions of lives, a scattering of the darkness as the light and power released at the resurrection of Jesus begins to shine in those who have been made Sons of God and heirs of a new Kingdom.

With this new Kingdom comes a new way of living, a straightening of twisted lives, a release of captive minds, a renewal of hope. There comes a healing of scarred relationships, the birth of new ones growing into purity, truth and an overwhelming thanksgiving to the King of this new creation. There dawns the joyful discovery of a new self, no longer ruled by sin, but acceptable to the Father through the atonement of Christ, clothed in His purity, filled with His Spirit.

The promise of dawn is a glorious new day; but these songs are just the first few streams of light in the breaking of that dawn in my own life; I have not tried to cover up failure and pain but simply tried to be honest...

"Now I can laugh I can cry and I can sing
The sweetest joys and saddest tears can now begin
An honest heart and honest eyes its been a beautiful surprise
Since God gave my true feelings."
Graham Kendrick

Peter At The Breaking Of The Bread was re-recorded in 2004 for Sacred Journey and in 2010 for The Acoustic Gospels. 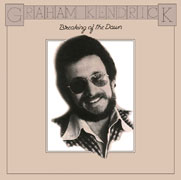