Triumph In The Air

Countdown (Now and then you may discover)

Is There Life On Earth (He walks out on another morning)

Living On A Landslide (I wish you knew who I know)

Triumph In The Air (Shame! Let us hang down our heads)

Strong In Me (There's a lesson I've been learning)

We Have Seen Him (Blackest day, sleepless night)

Ascension Song (Where are you going?)

Triumph in the air was written while Graham was working with British Youth For Christ in Wolverhampton and featured Graham on Piano with Mark Williamson and Stuart Penny on backing vocals. Nicodemus was re-recorded in 2010 for The Acoustic Gospels. Singer Sheila Walsh also released an album of the same name featuring several of Graham's songs. 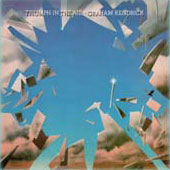