Praise To The Lord

Look To The Skies

The Servant King (From Heaven You Came)

The Lord Is King

Praise To Our God

Here In This Holy Place

To Keep Your Lovely Face

The Price Is Paid

Lord Make Us Still In Your Presence (May the peace)

The 1980's was the decade that brought the songwriting of Graham Kendrick to the fore. with events like Spring Harvest and March For Jesus the platform for corporate worship was ever expanding.

Let God Arise was released in '83 and features songs that defined the era and are now acknowledged as classics. Led like a lamb and Rejoice, Rejoice are two such songs. It is however, the poetry of The Servant King that stands out. Lines such as 'Hands that flung stars into space to cruel nails surrendered' have endured and still find meaning in the 21st century.

Led Like a Lamb was recorded live for 2004's Sacred Journey while The Servant King has appeared on numerous album's since but most recently on USA Live Worship. Kingsway also included all the songs from Let God Arise on their Songs of Graham Kendrick compilation.

Led Like a Lamb (You're Alive) and The Servant King (From Heaven You Came) were both re-recorded in 2010 for The Very Best of Graham Kendrick. 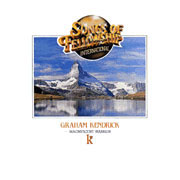 If you do not find what you are looking for please contact Make Way Music here and we will help if we can.